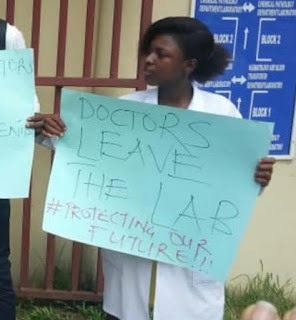 On Thursday, 5th September, 2019, we (Intern Medical Laboratory Scientists) came to the laboratory (our place of work and training) only to discover that every section of the laboratory was under lock and key and heavily fortified with security agents.

The security agents were approached and asked why we can’t gain access and we were informed that it was an order from the management and we should await further instructions.

Past, we waited and at about 8am, a group of management staff accompanied by security agents came in to address everyone and we were told that admission into the Laboratory will be based on display of Staff Identity Cards.

In regards to the management decision and compliance to the civil service rule, all interns and Staff having their ID’s on them entered the laboratory and started their laboratory analysis of samples while those without ID’s left the hospital premises immediately. It was almost a calm and quiet morning.

Scuffle ensued when students of Medical Laboratory Science of University of Calabar noticed that the Medical Students of same school were granted entry into the Laboratory without their ID’s, while they (Medical Laboratory Science Students) were denied entry to carry out their mandatory Laboratory posting. This particular act of undue preference flared up tempers and the students raised questions and demanded to know why they weren’t allowed entry while their counterparts in the Medicine department was allowed. This led to a peaceful protest by the students and some scientists.

There are reports of some students who were harassed and injured by the Resident Doctors in this process.

Some video and photo evidence are documented with regards to this unfortunate incident.

However, Normalcy has since returned to the premises as the Chief Medical Director of the hospital waded into the matter.

On this note, we as Interns of Medical Laboratory Science request that proper investigation be launched and the offender’s be held responsible.

Also, we request the management to call Resident Doctors to order and also instruct them to cease from harassing and abusing us so as to enable us carry out our duties in peace.

It is also worthy to note that the current crop of Medical Laboratory Science Interns were in no way involved in any violence and we will continue to be peaceful and abide by the rules that govern us all.

We want issues to be resolved and everyone be allowed to do what is rightfully their duty without fear of harassment or interference of any sort.

The above is contained in A REPORT OF EVENTS ON THE 5TH SEPTEMBER, 2019 IN THE LABORATORY SECTION OF UNIVERSITY OF CALABAR TEACHING HOSPITAL AS DOCUMENTED BY MEDICAL LABORATORY SCIENCE INTERNS

MLSCN’s Head of Lab. Accreditation Get A New Position