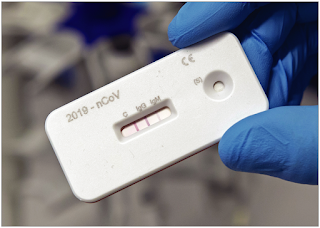 Temitope Alo
Some days ago, the Nigeria Centre for Disease Control (NCDC) when confirming the number of cases made it known that 26% of COVID-19 cases are of unknown sources. More distressing was the fact that the country hasn’t been it to figure out in detail the scale and prevalence of this pandemic across the country. This could be a very dangerous precedent in the country’s effort to tackle the disease.
And so, accidentally stumbling on a German preliminary research paper, I found out that approximately 14% of a sample population of the Gangelt municipality in Germany had a positive serology antibody test results, while 2% of the individuals were tested positive for COVID-19 using molecular diagnostic test.
In the 500 samples that was tested, the 14% of those who were positive for the serological test for SARS-CoV-2 virus were previously infected with the virus but recovered and the antibodies that did that were still in circulation which made them to be positive for the anti SARS-CoV-2 IgG.
But about 2% of the individuals tested positive for the molecular test – the exact type of test we have all over Africa. Which meant the individuals still had a current SARS-CoV-2.
This discovery brought up various issues that I would to like to discuss:
At first, the wide difference between a serology antibody test and a molecular test.
Who could have known that altogether, 16% of the population had actually contracted the virus without a serology antibody test being carried out? Sadly, if that were to be in Nigeria as our testing is still molecular based, the official statistics would be that 2% had the virus, meaning 10 people. Whereas, a total of 80 people have had the virus and somehow, a total of 70 had recovered but the remaining 10 still had the virus in their system. This shows us a wide difference between a serology antibody test and a molecular test.
To briefly explain the difference, a molecular test detects the presence of a pathogen in the body. It may also detect fragments of the pathogen before it’s fully cleared from the body, even if the pathogen is no longer able to replicate or cause disease. The most common technique is the RT-PCR (Reverse Transcriptase Polymerase Chain Reaction) used to detect the presence the virus.
But the limitation of this test is; it cannot provide a diagnostic result for someone who was previously infected and has already been cleared of the infection.
But a serology antibody test detects the presence of the body’s immune response to a pathogen. Our body produces antibodies which are also known as Immunoglobulins (Ig) which are part of our body’s defense against an infection. To be specific, a serology antibody test detects two classes of antibodies; Immunoglobulin M (IgM) and Immunoglobulin G (IgG) in the blood because of their crucial roles in targeting and destroying a foreign antigen.
In Public Health, a molecular test would be of help in grasping a pandemic in real-time but a serological test would help us known the severity and scale of pandemic.
Secondly, that the two tests could help estimate the scale of the pandemic.
According to the NCDC’s National Strategy to Scale Up Access to Coronavirus Disease Testing, the NCDC stated it “will explore the role of antigen and antibody tests in the future. This is essential to understand the rate of infection, and how the virus is spreading across the country. This will enable an assessment of the impact of measures taken so far to contain the virus, to inform current and future actions.”
This shows, presently our reliance on molecular testing presently. With a combination of the two tests, we would have gotten the severity of the disease earlier and this would have immensely been of great help in contact tracing and group isolation.
That the immune system of some subjects were able to fight off the virus itself.
Indeed, there are a lot of questions that needs to be answered. It is surprising that the immune system of 14% of the sample population could fight off the virus by itself. How did that happen? Did the antibodies detected by the serology test actually killed of the virus? Would a considerable amount of antibodies protect against the virus? If possibly, what amount of antibody that will be needed for protection? How long will these antibodies last and how effective they would be with time? Can the virus help trigger an immune memory as in the case of some pathogens? All these and many more questions needs to be answered and these will be done by a very thorough research.
That Cloned Antibodies from recovered patients (hopefully after a favorable research outcome) could be of help to patients who are gravely ill of the virus.
With research being carried out in China, there’s a possibility that antibodies gotten from recovered patients can be turn into a therapy for people who are gravely ill of the virus.
Also, the U.S. Food and Drug Administration has been coordinating efforts in developing a blood based antibody rich COVID-19 therapies if perhaps, could provide immunity to people who have been exposed to the virus. Nigeria can learn from this and start a research on this too.
In conclusion, with a combination of these two tests, we could get to know the scale and severity of the pandemic. As the NCDC would be exploring this test in the nearest future, it’d be good to speed up this research – combining both molecular and serology antibody testing together.
With timely data and information about the prevalence of the disease, this would help the government make well-informed decisions in tackling the virus in Nigeria.
Temitope Alö
(Department of Medical Laboratory Science, Ladoke Akintola University of Technology, Ogbomoso)