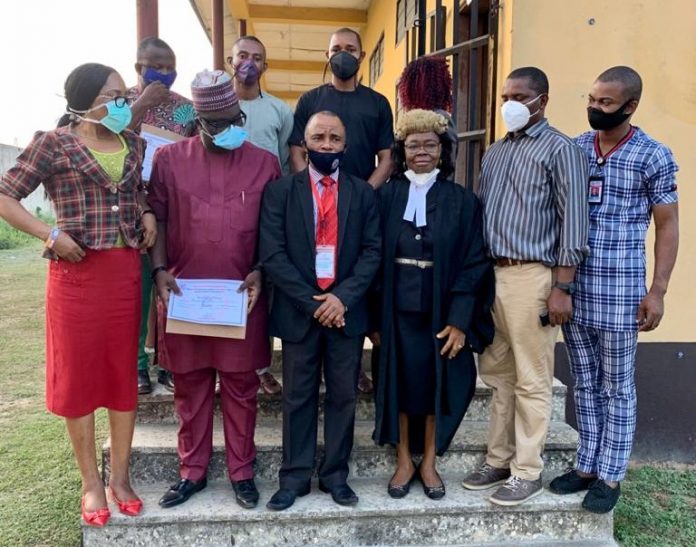 The event which was held at the ETF block of the university of Uyo teaching hospital had the National Vice President of GMLD and other top notch of the profession in attendance.

Presenting his account of stewardship, the outgone chairman, Sct. Clement Obot applauded all for the support given him from 2015 till date. He poured special encomium on Prof. A. E. Udoh, who showed him the way to follow, because according to him, he took the Guild from the scratch.

Presenting the new excos for inauguration, the indefatigable Electoral board chairman, Sct. Ekom obong Ukpe, described the elections that ushered in this new brand of excos as exceptional, free, fair and transparent.

According to him, all the excos have been constitutionally cleared and elected.

High points of the event witness the administration of the oath of office to the new excos by the legal adviser of the Guild.

Sct. Oluwole Fadayomi was sworn in as Chairman, Aniekan Akpadiaha as Vice chairman, Antia Aniebiet as secretary while ThankGod Sunday and Ekemini-Jesus Raymond as Treasurer and PRO respectively.

In his acceptance speech, the tear rubber President presented his 5 point agenda for GMLD of Akwa ibom state, which he tagged’ SERVICE BEYOND BORDERS’.

He promised to run an all inclusive government so as to bring the Guild to a higher standard.

He called on all members to give the new executive the financial and professional support they need to succeed.

In his goodwill message, the National vice chairman, south- south of GMLD, Pastor Dr. Chinedum Solomon, thanked God for the new dawn in the guild in Akwa ibom state. He applauded the new excos for taking this bold step, and promise to give the Guild the needed support to succeed.

Similarly, the National welfare officer of AMLSN, who also doubles as the State chairman of AMLSN in Akwa Ibom Mrs. Emilia Eliezer could not hide her happiness, as according to her she was happy that GMLD was resuscitated during her tenure in office.

She paid kudos to the outcome excos and equally challenged the new ones to improve on the standard laid.

Other dignitaries in attendance included the State chairman of GMLD in Cross River state, the Legal adviser of the Association, Barr.Benedette Aniefiok Udoh.

UNIUYO: How to apply for Medical Lab. Science in Post UTME

MLSCN Governing Board felicitates with Prof. Teddy Adias on his Appointment