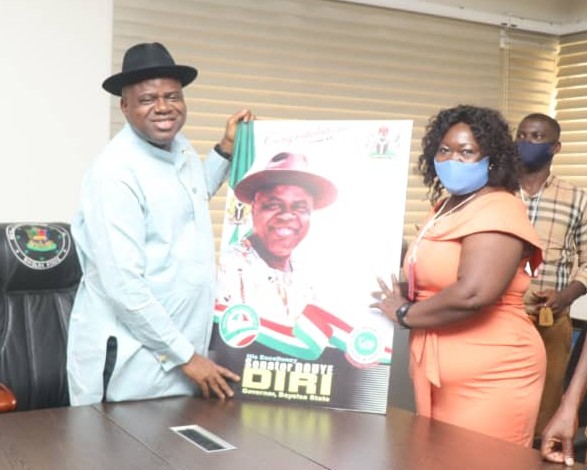 The Governor of Bayelsa State, Sen. Douye Diri has promised to attend the 2021 Annual Scientific Conference of the Association of Medical Laboratory Scientists of Nigeria (AMLSN) to be held in Yenagoa, the Bayelsa State Capital.

According to the Governor, he has been informed in advance and would oblige if officially invited.

The Governor disclosed this when members of the Association of Medical Laboratory Scientists of Nigeria (AMLSN) Federal Medical Centre Yenagoa paid him a courtesy visit at the Government House recently.

Speaking during the visit, the Chairman AMLSN Federal Medical Centre Yenagoa, MLS Eunice Lelei-Suoteigha congratulated the Governor on his one year in office and his achievements so far.

She used the opportunity to inform the Governor that the State has won the hosting rights of this year’s biggest gathering of Medical Laboratory Scientists across the Country which is the Annual Scientific Conference and Annual General Meeting (AGM) of AMLSN.

In the same vein, MLS. Lelei-Suoteigha made a request for the presence of the Governor at the upcoming AMLSN Scientific Conference.

In his response, the Governor promised to oblige the request if an official invitation is sent to him. He also congratulated the Bayelsa State Branch of AMLSN for winning the hosting rights and thanked them for the greeting card.

Highpoints of the visit was the presentation of a giant card to the Governor.

Present at the visit was MLS. Ahmed, MLS Eunice Lelei-Suoteigha, MLS. Tommy Edidiong among others.