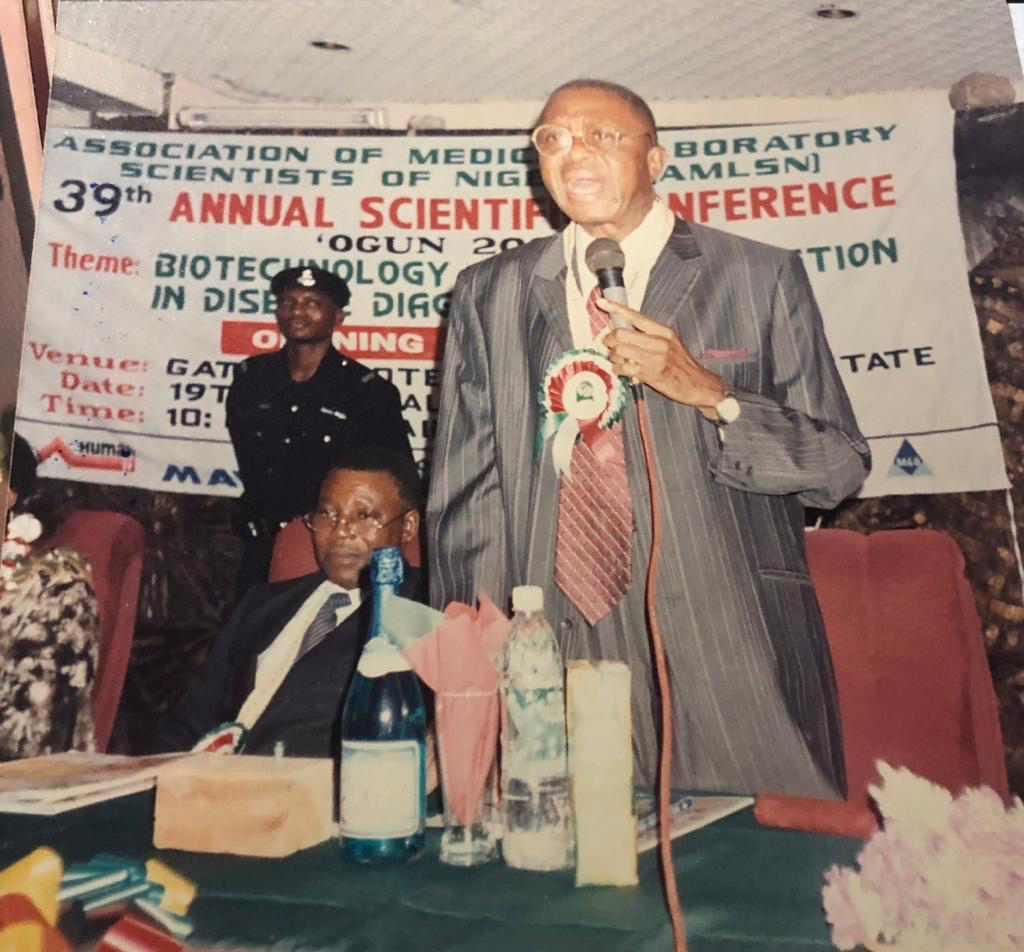 Sir DIT as fondly called by his numerous students, mentees and admirers, was one of the pioneers of medical laboratory science education and practice in Nigeria, a Registered Fellow (RF 0024) of the Medical Laboratory Science Council of Nigeria (MLSCN). He had his training in the United Kingdom, specializing in Chemical Pathology in 1959 and Fellowship in Bacteriology in 1965.

His burning love for and interest in the profession and in the Association of Medical Laboratory Scientists of Nigeria (AMLSN) kept glowing to the very end. Always eager and willing to attend and participate actively in all AMLSN programmes and conferences both at State, Zonal & National levels. He served meritoriously as the pioneer and longest serving Chairman of the Board of Trustees (BoT) of AMLSN from 1992 – 2015. He was the first Medical laboratory scientist to serve as the Chairman, Governing Board of the Medical Laboratory Science Council of Nigeria from 1999 – 2003. 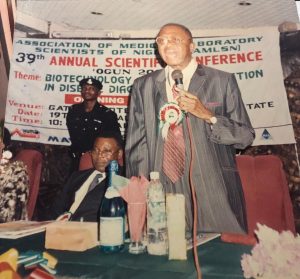 I will never forget when I had to hurriedly prepare BoT Letterhead & Seal to rush to him in his Enugu residence in 2012 in the heat of the Federal Medical Centre, Asaba vs AMLSN litigation for an important BoT authorization to surmount and defeat a major legal hurdle that would have derailed the court process. We emerged resoundingly victorious, and it became the stepping stone and foundation for our court victories in the OAUTHC long-drawn case of over 9 years and other court cases. 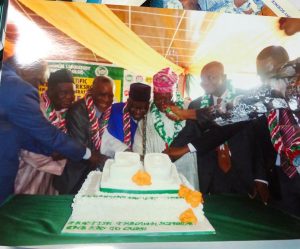 Papa Tabansi will forever live in our AMLSN and MLSCN evergreen memories as a diplomatic colossus, a smooth operator with eyes and acute mind for long-standing results. May your soul Rest In Peace in the bosom of your Maker. He called me often on phone to inquire about the happenings in and progress of AMLSN, even after I had served out my tenure as AMLSN National President.

In the days of “The Determinant” Radio programme in 2012 – 2014, he would always call me after each Monday’s broadcast on FRCN Network to commend, comment and encourage us to ride on.

Papa’s voice, diction and English phraseology was always sharp, coherent and with clear direction even in old age. He was an embodiment of inspiration, encouragement and hope. He had an acute memory and knack for accurate documentation of historical details of events in their chronological order.

Immediately, after the 2012 AMLSN Conference/AGM in Benin City, Edo State, I requested Mr. Manason Rubainu, my predecessor in office to accompany me to Prof. Dennis Agbonlahor’s residence in Benin City, where we shared with Prof, the resolve of AMLSN to commission and fully fund him and his crew to go round the country to physically interview and record in both audio & video versions all surviving leaders, founders and elders of our profession in Nigeria, for purposes of writing a comprehensive publication of the history of medical Laboratory Science profession in Nigeria for presentation during the Golden Jubilee (50th year anniversary) of AMLSN in Akure, Ondo State in 2014.

The project and assignment led to the publication: “Evolution of Medical Laboratory Science Profession in Nigeria” which was presented and launched at the Golden Jubilee of AMLSN in Akure in November, 2014 under the distinguished Chairmanship of His Excellency, Chief Ernest Shonekan GCFR, the former Head of State of Nigeria.

We have lost a man who left his footprints in the sands of our profession, a medical laboratory scientist cum chemical pathologist; a teacher & mentor of many medical laboratory scientists in the University College Hospital Ibadan, the University of Nigeria Enugu Campus/UNTH and indeed across the length and breadth of Nigeria, an Examiner for MLSCN & MBBS students in chemical pathology for many years; the pioneer Head of School of Medical Laboratory Science UNTH Enugu; a teacher and mentor of many physicians & surgeons in UNN Enugu Campus; a former Chairman of MLSCN Governing Board 1999-2003. He was presented with many awards by physicians & surgeons who were his former students.

A man whose physical comportment, impeccable appearance, disciplined conduct & diplomatic finesse was a study in dignity, and inspired the admiration & confidence of people in him. In his heydays in UNN, successive Vice Chancellors of UNN had direct dealings with him and appointed him to many Committees of the University on his personal merit.

His was truly a case of “the rank does not make the General, but the man makes the General”. His character, intellect & spartan lifestyle stood him apart for special recognition and leadership responsibilities at all times.

Like Apostle Paul, Sir Dunstan Ikem Tabansi has run his race, he has fought a good fight, he has kept the faith, and henceforth there is laid up for him a crown of reward & commendation for playing his part excellently, till the very last moment.

Adieu Papa guy, as we fondly called you. Your legacy in AMLSN & Medical Laboratory Science profession shall live on. You will surely live on in our hearts & memories. Adieu!!! Rest well in the bosom of your Maker.

Dr. Godswill Chikwendu Okara is the Registrar/Secretary-General of West African Postgraduate College of Medical Laboratory Science. He writes from  Abuja.