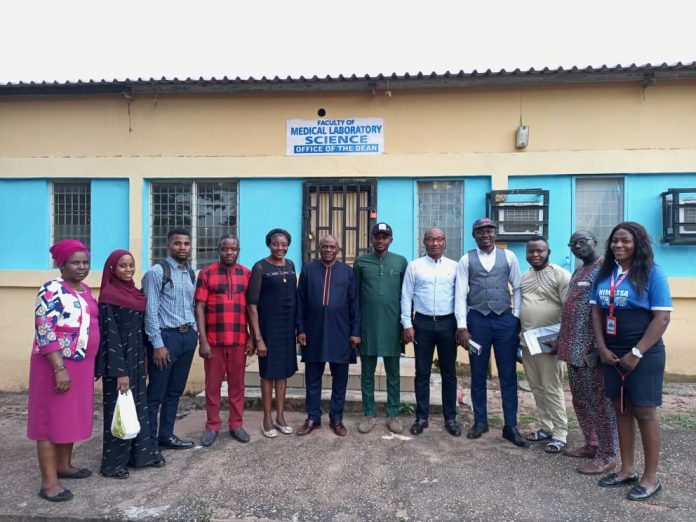 The delegation was led by the Forum’s National President MLS. Emmanuel Khoda Nkumah on arrival at AAU was warmly and heartily received and immediately taken on a tour to the new Faculty building inside the main campus. 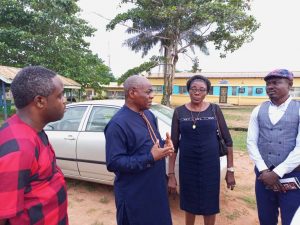 It was indeed a good sight to behold, as all departments were fully captured with each having its own building. The Executives were elated having found out that office space was provided for the AAU NIMELSSA executives.

After the tour, the Executives proceeded to meet with the Dean and his team.

Matters that formed the discussions between the Dean and the Leadership of YMLSF included:

1. A well-deserved congratulations and accolades were showered on the Dean and his management team for influencing the approval and commencement of the new Faculty of Medical Laboratory Science.

2. That an orientation program is organized for new inductees by YMLSF before the day of their induction. This will enable a smooth integration of the new inductees into the forum and by extension the Association.

3. That YMLSF is actively involved during the induction event and allowed to welcome the inductees into the Forum and by extension the profession. The YMLSF will also be awarding the best graduating student as a way to motivate other students to be diligent and committed to their studies.

4. Mass admission of students and production of MLS graduates.

The Executives discussed extensively with the Dean and his team to reduce to the barest minimum, the production of graduates from the school citing that the laws of demand and supply as it has to do with employment is no longer favorable for MLS as compared to other sister health professions.

In his response, the Dean was pleased with the visit and propositions and gave full assurance that all our proposals will be given positive considerations.

He also informed that they have marshaled out modalities to cut down the number of graduates and have built a very cordial relationship with the School Management that will enable the proper regulation of MLS admission to meet with MLSCN, NUC, and global standards.

It was indeed a successful outing.

Among the entourage of the YMLSF National President was the Secretary, MLS Jegede Onos Suleiman and the Program Director, MLS Isioma Uwagbai.