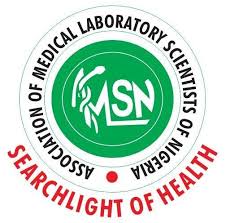 Read the press release below:

On April 27, 2019, we the Association of Medical Laboratory Scientists of Nigeria (AMLSN) raised the alarm that a gang of pathologists of the University of Calabar Teaching Hospital (UCTH) were plotting to disrupt the peace of the hospital. We stated, unequivocally, that the Chief Medical Director of the UCTH, Prof. Ikpeme Asanye Ikpeme, and the Chairman, Medical Advisory Committee (CMAC) of UCTH, Prof. Ogbu Ewezu Ngim, were the masterminds of the plot.  And, today, our fears have been confirmed: the management of the UCTH is not only victimizing Medical Laboratory Scientists in the UCTH but has now resorted to molesting them as well. The situation is not only reprehensible, it is disrupting the peace and the routine healthcare activities in the hospital, and it calls for serious concern.

3. That, the act of undue preference by the management of the UCTH against the students flared up the tempers. Fracas ensued when the Medical Laboratory Science students on training, who were restricted entry into the medical laboratory, noticed that their counterparts (Students of Medicine, from same UNICAL, also on training in the hospital) who also did not possess the identification cards, were granted access into the Medical Laboratory.

4. Discriminated against therefore, the Medical Laboratory Science students demanded the UCTH management explain why it issued the order stopping them from gaining access to the medical laboratory, whereas their counterparts in Medicine were allowed access into the same Medical Laboratory without any conditionality; that the situation eventually led to a peaceful protest in the hospital by the students.

5. Reports claim that a second fracas ensued when some Resident Doctors including Dr. Babatope Oluwakorede Ayodele resorted to willful damage of medical laboratory equipment with which they injured some Medical Laboratory Science students.

6. Video and photo evidences of some of these incidences are available.

To us, a number of questions are apt even at this juncture:

WE ARE NOT CLUELESS

To us, the staff identification card issue against our students was a smokescreen. The discriminatory restriction order was schemed by instigators in the UCTH management to provide grounds for them to throw out the students, not minding that they were mere students who were in the hospital for their Mandatory Medical Laboratory training. The move was not only a tacit rejection of the poor MLS students; it is clear that the Medical Laboratory Science students were singled out for the maltreatment in order to create unrest in the hospital― a case of giving a dog a bad name in order to hang it! This deliberate acts of creating unrest in the hospital, by the UCTH management, and then turn round and make a scape goat of MLS, exposes the high-level hatred harboured by most misguided, or, unscrupulous pathologists in the UCTH management and elsewhere against MLS and against anything else bearing its symbols or semblance!

The so called intervention by the CMD of the UCTH in the current crisis in the hospital was a make-believe only to subject our members to torture of all sorts. For instance, the CMD UCTH and his management have deployed armed men (alleged to be men of the SARS unit of the Nigeria Police Command, Calabar) to the hospital who terrorize medical laboratory scientists, interns and students undertaking their lawful routines of work and training at UCTH, Calabar.

Second, at the whims and caprice of the management of the UCTH, Calabar, the Department of Security Services (DSS) in Calabar have been inviting and taking into custody Medical Laboratory Scientists working at the UCTH Calabar for endless interrogatory sessions.

Our members could not secure justice even in the hands of the Police in Calabar. A number of MLS, including TWO NURSING MOTHERS, who were arrested and held in police detention on the express orders of Prof. Ikpeme, were denied bail. Concerted efforts involving the Cross Rivers state Commissioner of Police to secure their bail met stiff resistance of a Deputy Commissioner of Police, Mrs.Tami Peterside who is the Commander in charge of the Area.

A Lawyer who was hired to secure bail of the detained MLS alleged that that police operatives under DCP Peterside demanded and received gratification for their bail. Beyond the compelling questions over the UCTH management-instigated unlawful arrests, molestation and detention of MLS by the Police, a background check indicate that DCP Peterside’s husband and two sons are all Medical doctors. Clearly the DCP was biased in the matter; she took sides with the doctors against the MLS.

Prof. Ikpeme Asanye Ikpeme and Prof. Ogbu Ewezu Ngim belong to the category of physicians who are sworn to denigrating and collapsing the medical laboratory services system in UCTH. Little wonder their tenures of office are characterized only by such decadent impunity and abuse of power.

In the bid to frustrate the medical laboratory science profession, they have entrenched chaos, quackery, disruptions of quality medical laboratory services in the UCTH, hence putting the lives of healthcare seeking members of the public in jeopardy.

Cases of victimization of MLS at the UCTH and other malevolent conduct against them by the management are copiously documented. Evidence abound that Prof. Ikpeme has been busy with issuing circulars which tend to incite Dr. Lawson Ekpe, Dr. Godwin Ogban and some other pathologists towards their renewed but misplaced clamour against the prescribed roles and duties of the Medical Laboratory Scientist in the UCTH. Not long ago, without recourse to the UCTH Governing Board, Prof. Ikpeme and his management, vide an Internal Memo Ref: UCTH/CSRT/09; dated: 11th September, 2019, fashioned themselves into a court of law of superior jurisdiction. The covert objective of the memo is suppression of MLS. The prelude is the current crisis.

Our students are persecuted. Our members are terrorised, molested and detained. Patrick Bassey O’neil (May his soul rest in peace) may have been murdered. Yes, MLS are being decimated. But, we cannot be cowed by any individual or group whatsoever. We, MLS, derive our authority to deliver services to the health care seeking members of the public from the Second schedule, Paragraph 49, and Sections 169-170 of the 1999 constitution of the Federal Republic of Nigeria (as amended). Since 1972, the Federal Government gave administrative role of Medical (clinical) laboratories to Medical Laboratory Scientists (MLS). Several circulars of government up to 2003 also gave that responsibility to medical laboratory scientists (MLS).

We have over 16 court judgments across teaching hospitals and federal medical centres in Nigeria in our favour. The situation whereby Nigerian physicians who by sheer advantage of their appointment as CMDs, MDs or CMACs, blatantly refuse to respect the status quo and, or, the rule of law is anarchical and unacceptable.

We therefore are appealing to the new Minister of Health, Dr. Osagie Ehanire to call to order the CMD, UCTH Calabar. We urge the Minister of Health to evolve processes that will end the continuous victimization of Medical Laboratory Scientists serving in all federal and state tertiary hospitals in Nigeria.

We are concerned about the grave consequences of this untoward situations on our health sector because at the receiving end are the patients who come to receive care.

We call also on President Muhammadu Buhari, GCFR, the father of our new Nigeria, to intervene and permanently end the malevolency meted on MLS in all our health institutions, especially the ongoing decimation of Medical Laboratory Scientists at the UCTH, Calabar. A stitch in time saves nine.

For: Association of Medical Laboratory Scientists of Nigeria (AMLSN)