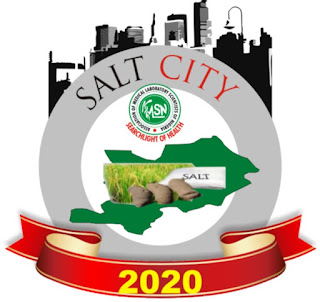 This year is an election year and Medical Laboratory Scientists will be going to the polls to elect a brand new crop of National Executive Officers (NEO).

A good percentage of Medical Laboratory Scientists have indicated interest to run for one position or the other. Some have withdrawn the interest they indicated earlier to run for one office or the other citing reasons.
In this post, we will take a look at some  Medical Laboratory Scientists who indicated interest but later dropped their ambition to run for a seat in the forthcoming elections.
1. Prof. Felix Emelike: Associate Prof is the current National Second Vice President. He is no new to AMLSN Leadership as he had served as the National Auditor and National Financial Secretary in the past.
Earlier in July, the Head of Department, Department of Medical Laboratory Sciences, Ambrose Alli University (AAU) declared to run for the seat of the National First Vice President, however withdrew on the line. 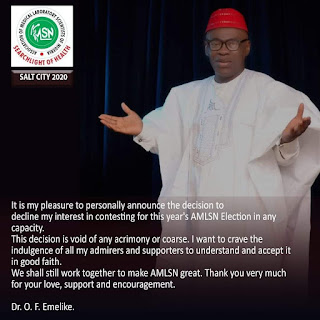 2. Dr. Agoro Solomon Eni-yimini: The current chairman of AMLSN Bayelsa State was one person, Scientists were looking out for in the forthcoming elections immediately he expressed his interest to run for the position of the financial Secretary but he changed his mind before we could know it.
In his withdrawal statement, he wrote:

I wish to formally inform my esteemed supporters of my withdrawal from the race for the position of National Financial Secretary. Leadership is all about sacrifice, selflessness, and service, and not a forceful and desperate venture. Wish AMLSN unprecedented leap in all areas. To my Elders;  may your days be long and eventful for your colourful stances. To my supporters; don’t be disappointed as God is the creator of leadership and all powers domicile in His Hand. To my Branch; don’t agonize , rejoice for that is the will of God. Dr. E.S. Agoro.

3. Jelil Mustapha: His declaration came as a surprise knowing fully well that he is an abroad based Scientist. However,  many saw his coming as a welcome development in view of the fact that he is one man that has always criticized the system and insisted that the right thing be done at all times.
However, he withdrew immediately the AMLSN Electoral Committee released the electoral guidelines and timetable citing the earlier fears Scientists had as his reason.
He wrote:

RE: DECLARATION OF A NEW ORDER
Fellow Colleagues,
If you can recall, I declared to run for the office of National Assistant Secretary of AMLSN in the upcoming election. The declaration brought about many supports for my candidature owing to the fact that we are bringing a new order to AMLSN.
After deliberations and consultations, I have decided to rescind my decision to run for this position. This is not because I cannot get on the ballot paper, it is because of my numerous roles I recently took upon myself here in Canada which will need my commitment and dedication.
I thank all my supporters who believe in my dream for a new AMLSN. Having said that, I am more than happy to work with elected officers in terms of collaboration, partnership or whatsoever to uplift the image of the profession.
Thank you all and I wish all contestants and electorates a peaceful voting process. However, we must ensure we vote wisely.
Yours sincerely
Jelili Mustapha

These are all we know for now, if you know any other Medical Laboratory Scientist who earlier indicated interest to run but withdraw on the way, do well to tell us in the comment section.
For assistance with MLSCN licence Remita Generation.. click here
- Advertisement -

Aims and Objectives of Society of Chemical Pathology Scientists in Nigeria

AMLSN Honour Wife of Sokoto State Governor with An Award

What Prince Elochukwu Adibo has in store for GMLD and MLS...