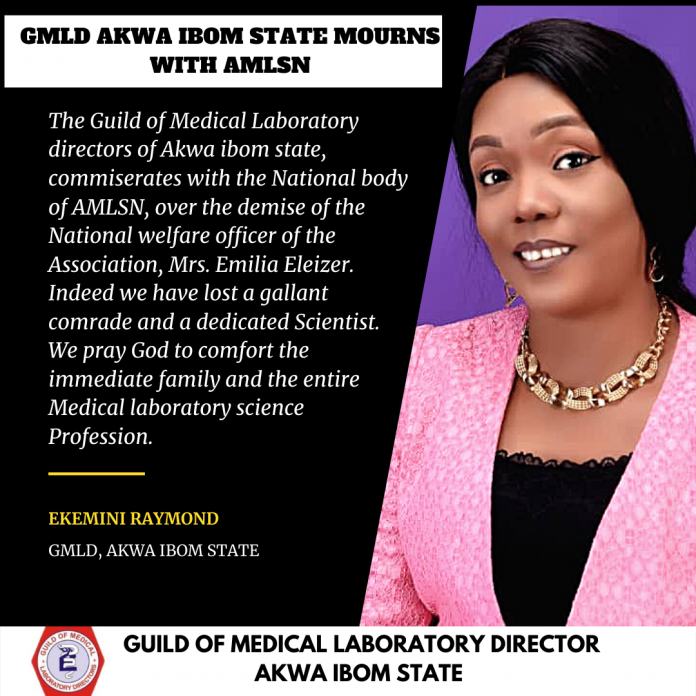 Facts are emerging on how the National Welfare Officer of the Association of Medical Laboratory Scientists of Nigeria (AMLSN) Emilia Eliezer died.

At the time she was reported dead, information regarding the circumstances surrounding her untimely death was not known. This kept many contemplating what could have being the cause of death and why the death happened in Calabar when she was based in Akwa Ibom State.

However, on Tuesday information being circulated on the popular social messaging platform WhatsApp suggested what could have actually happened.

“She came for her PhD exam which she didn’t even write.Her colleagues called asked questions,after the exam went to the hotelasker severally until they broke into her hotel room & found her unconscious.Rushed to A&E.She died just before me at A & E last night.No! She was not ill!”

Her death was received as a rude shock and has left the whole Medical Laboratory Science profession devastated due to her doggedness and commitment to the profession during her lifeline.

During AMLSN 56th Annual Scientific Conference, Workshop and General Meeting held in Abakaliki, the Ebonyi state Capital, she contested for the Position of the National Welfare Officer after completing a tenure as Chairman of AMLSN Akwa Ibom State Branch. At the end of the election she emerged the winner with a landslide victory.

On Tuesday, members of the AMLSN Cross River Branch came out in their numbers to bid her farewell to her home state.

In a statement released by the AMLSN National Publicity Secretary Olusoji Billyrose, the Late National Welfare Officer was described as a ‘great Iroko, Jewell and beautiful soul’

She will be greatly remembered for her love for the Medical Laboratory Profession and humanity.

From all of us at NigerianMedLabScientist.com.ng, we pray for God to grant the deceased family the fortitude to bear this irreparable loss.

May her gentle soul rest in the bosom of the Lord….Amen!

Society for Scientists in Infectious Diseases constitute Committee for inauguration &...